Bringing resilience into the light 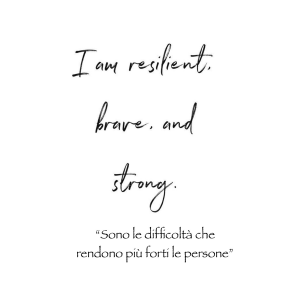 Bringing resilience into the light

That’s one of the concepts that emerged during the focus group with people from Albania. Resilience is a vital concept brought to light by the many difficulties they had to go through to arrive in Italy and search for a better life than the one they left in their own country.

Who arrived in the trunk of a car with others, some in a barge, some for reunification only to take care of an entire family. Each has different difficulties, but everyone has complicated stories that lead to independence in a “forced” way.

This particular thematic in psychology translates with the concept of “hardiness” that is made up of three parts:

The obstacles that a woman has to face are different from those of a man: from our meeting, we noticed some differences; The women that we spoke to had come to Italy with a specific task, to take care of the family, made not only of the mother, dad, and children but also by kin, not having any more time to devote to themselves and their personal growth. The difficulty lay there, to conciliate everything; maybe the journey was not that hard. Still, the arrival threw the girls in reality utterly different from the one they left at home, where a lot of them had everyday lives, not necessarily made of poverty in the origin country.

Instead, men had to deal with difficulties in their journey, in that they do not know precisely where to they are going and if they will ever arrive at the destination. The challenges of finding where you to know anything; a participant tells the amazement he had when he saw a train for the first time, trying to board it: “I didn’t even know how to get on board of a train because in Albania they don’t exist.”

We paused more on the documents; everyone agreed that they slow the process of integration a lot; a participant states: "You are really integrated when, after receiving the documents, you can work and do all the other activities. If you are not regular, there is the risk of criminality". We discussed how nowadays the future is cloudy for everyone, not only the young migrants. To overcome this obstacle, the participants suggested counting on the community's support, getting informed, and never being afraid to ask, "I came from Albania, what do I do now?".

Overall, ‘will’ emerges as an essential feature for a good integration; within this, we discussed how nowadays the future is cloudy for everyone, not only the young immigrants. A participant said: “The future of our children is the same as Italians. They will face the same difficulties”. Taking inspiration from Curie, we can see this future more clearly and with hope.

“Life isn’t easy for anyone. So? We have to persist and, more importantly, have confidence in ourselves. We have to believe that we are talented for something, and this something has to be reached.” Madame Curie: A Biography (1937) by Eve Curie Labouisse, Part 2, p. 116

This post is the result of reflections and experiences of the group of young peer researchers at the Catholic University of Sacred Heart of Milan, Italy. In the UCSC MIMY team, peer researchers have been precious; they became passionate about the activities, actively contributed, and provided an alternative point of view to the research team, influenced by their own migration experience.