My reconciliation with the word “immigrant” 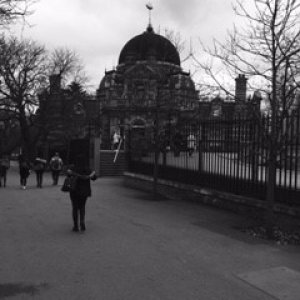 My reconciliation with the word “immigrant”

As someone who has experienced living in different parts of the world, first living in the UK and now in Luxembourg, being a South African citizen with ancestral Congolese roots, I’ve always felt conflicted to put myself under a cultural label as I often feel detached from these cultural identities. To paraphrase, even though I was born in South Africa, I never really felt “South African” because of my parent’s heritage but that being said I would never say I’m Congolese because I’ve never been to DRC or speak their official languages. Living in the UK allowed me to explore and delve into another culture but despite living there for 5 years I wouldn’t say that I’m “British”, because I was often interacting with culture through an “outsiders” perspective. Now living in Luxembourg, I still feel like I haven’t settled into the culture yet. I think this disassociated feeling perfectly encapsulates my perception of immigration.

I fondly recall the first day of school. I was “fresh of the boat” in the UK, arrived bright-eyed and bushy-tailed. As I walked forward towards the classroom door I remember the level of optimism I had. I opened the door, soon as I entered the classroom I saw a collection of faces staring at me, their stares looked unusually strange to me. I remembered their stares being one surprise and then suddenly disappointment. My homeroom teacher said, “This is Grace she recently moved from South Africa”.

Even though the reception to me was quite cold, I was still enthusiastic about me being there or at least in the UK. Looking back, I think my enthusiasm stemmed from a sense of accomplishment rather than curiosity the fact that I managed to migrate to the UK was in my eyes “an accomplishment”, a sign of elevation and upward mobility. These ideas and beliefs invoke a sense of pride and self-insurance about my migration to the UK, they have heavily influenced my life and still do to a certain extent. Now though, I no longer look at “developed” “countries” through a rose-coloured lens but a critical and sometimes pessimistic worldview. Living in the UK shattered my preconception of what a developed country was, which usually encapsulates the idea of being “civilised”, “virtuous” and most importantly “incorruptible”. The perception was that countries in the west were the standard and that every other country should aspire to be like them. By living in the UK and even Luxembourg, I started to notice the cracks discretely hidden under the façade. There were still systemic issues in these countries that when you migrate to them, it is hard to overlook, these issues and micro-aggressions started to chip away at the pristine illusion of what living in Europe was supposed to look like.

During my time in the UK, there’s one event that stood out to me. It was the time where I had to do a presentation on South Africa as a sort of introduction of myself. As I was doing my presentation I could feel the uneasiness from the other classmates, the look of confusion as I talked through slide after slide, their dazed faces as I was patriotically showing my national anthem. I still remember one of the students taunting glare as I was showcasing the school I went to in South Africa. Even though she apologised by force through the teacher’s demand it influenced how I process my identity. After that event, I became more self-conscious about my identity as a migrant and started to become more proactive in my efforts to assimilate into “Britishness”. Looking back, I think I tried my best to distance myself from the word “immigrant” especially because I saw how the word “immigrant” was construed and given certain connotations.

The word “immigrant” is very controversial and it is intriguing to me to see how different sectors of the media would portray and react to it. From what I’d observed, left-leaning media views would be more sympathetic towards immigration and often voice their support for it. However, even though people in this line of thought have good intentions, their support sometimes can come with an insidious sense of superiority and can often be brought out through words of ignorance and pity. One notable incident I can recall is the infamous “who is going to clean your toilets Trump” said by TV fashion personality Kelly Osbourne. She voiced this statement in her appearance on the View, a popular commentary show in the US. To give context, she was voicing her frustration with Trump’s speech about immigrants and their supposed threat to the “American way". Her statement was wrong and came across as tone-deaf. Even though she intended to criticise Trump for being xenophobic she failed to mention and recognise social and economic barriers that LatinX communities face in the US, but decided to lean on the racist archetype of the " Hispanic maid". Left-wing media at times in their attempts to become socially conscious can come across as condescending.

Alternatively, far-right media largely project negative connotations towards the word “immigrant”. They mainly have critical views on immigration. From my point of view, their apathetic outlook often portrays immigrants as uneducated, “savages” and “leechers” which invoke a sense of fear and paranoia that aims to taint the perception of immigrants. An example that comes to mind is the far-right conspiracy “The great migration” which suggests that there is a white genocide taking place in Europe due to the influx of migrants coming into the continent. This rhetoric infiltrated its way into society, having drastic effects. For example, immigration was a highly centred topic in Brexit, which amplified an already hostile and antagonistic environment in the UK. This personally affected the way I navigated myself in the UK especially during the latter part of the 5 years as it conjured up feelings of uneasiness and inhospitality for me and other migrants that I knew who were carefully considering and fearing their prospects in the country.

Even though these sectors of media have different perceptions of immigrants, ironically they often depict them in the same way “poor” and “pitiful”. This would distort my view on what an immigrant was, as it was often associated with refugees and migrants from third world countries, which implied in my mind a lower status compared to the word “migrant” or “ex-pat” which implied a higher socio-economic position in” society”. This would help me further distance myself from the word and further my goal to integrate. But now that I’ve lived in the UK I realise that these depictions are constructed to stigmatise migrants from “third-world” countries and promote a sense of elitism and a colonial mindset among individuals living in “first-world” countries.

Now that I’ve moved from the UK to Luxembourg I found a way to reform my outlook on the word “immigrant” not to follow the narrow narrative that was constructed from a first-world perspective that has an intentional motive to demean people they see as lesser. But, through reclaiming and revitalising the word to give agency and cultural nuance. By taking the word, I’m actively trying to deconstruct and reinvent the word immigrant to embrace all the struggles and all joys that comes with it and use it as a label to speak to my experience because oddly enough this is the only label that has been congruent in my life.